6th & 7th July : From our camp at Nimaling we could clearly see the 17,000ft Kongmaru La (Pass) ahead of us. It seemed a rather long pass which ascended in parts both gradually and steeply.

By now the trail was crowded with other trekkers of the Markha Valley and local villagers. It was fabulous to see how strong our own walking pace had become as we continued to over take and pass other trekkers along the way. There was a batch of boisterous trekkers who were listening to a “boom box” while walking! The music was grand and orchestral and I too might have enjoyed the same music walking in those vistas provided it was plugged into my ears! I couldn’t quite believe their disrespect for the environment, the locals and other trekkers. I had only a moment’s indecision whether I should intervene or let this impoliteness pass. I couldn’t resist. I stopped the trekkers and quite breathless as we all were with our trudge, I gestured that the gentleman should plug the music into his ears or switch off the boom box. I think he was quite taken aback. He looked at me a little incredulously, but perhaps grey hair helps! He didn’t argue and quietly switched off the music. I thanked him and moved on. When I reached the top of the pass the same group was there, sunning themselves feeling heroic and the same victorious orchestral military music was playing again. Not loud enough to start avalanches but disturbing all the same. However as soon as they saw this grey haired woman, they switched it off. I think sometimes we let people get away with small misdemeanours and we should not. Small misdemeanours embolden such people to greater anti-social behaviour and leads to greater social problems. Keeping  peace and harmony in the environment and our own social networks is our collective responsibility. I walked away from them, positively sensing a halo around my own head……..

The walk down Kongmaru is steep and I was thankful that we were not walking up that way! The next four hours were spent negotiating a narrow and steep canyon from the base of Kongmaru La to our final campsite at Shamsumdo. The canyon had a rocky stream running through it, which in parts became a raging river and in the steeper bits became a waterfall. This water body had to be crossed multiple times during the walk. Fifteen times according to Takpa and he was not exaggerating. Although an uphill walk at altitude can make your lungs scream and gasp for air, a steep downhill, through a rocky action packed river can make your knees turn to jelly and absolutely “give up” and cry “no more”! Takpa stayed by my side, as I have a penchant for falling into the smallest puddles! Though this time around I negotiated the waters, all 15 times, scarcely getting my boots wet. My walking sticks helped. I would recommend walking sticks to anyone who wants to walk in the mountains until a ripe old age. They definitely take a lot of weight off the knees and exercise the arms too in the bargain. Even “Mah Boys” realised the value of walking sticks as they had read some of the younger mountaineers these days start using walking sticks at barely 30 years. 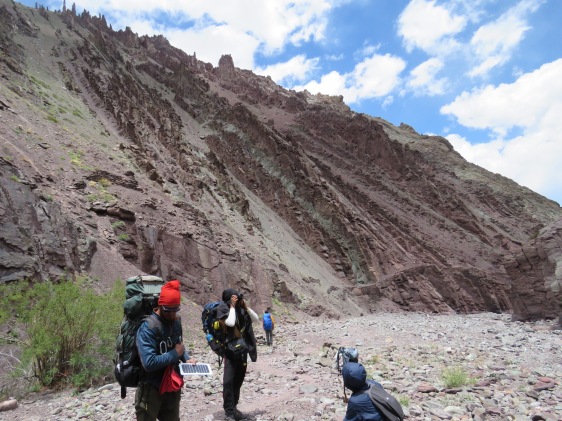 (In the gorge…sets of McKenna’s Gold)

The canyon is part of the Hemis National Park. All through the trek we had seen many different types of birds including golden eagles with their massive wing spans flying low overhead looking for marmots, a variety of finches, Tibetan snow cocks in plenty, snow pigeons, field mice. And then we had an incredible sighting of a herd of mountain goat coming down to drink water from the stream. 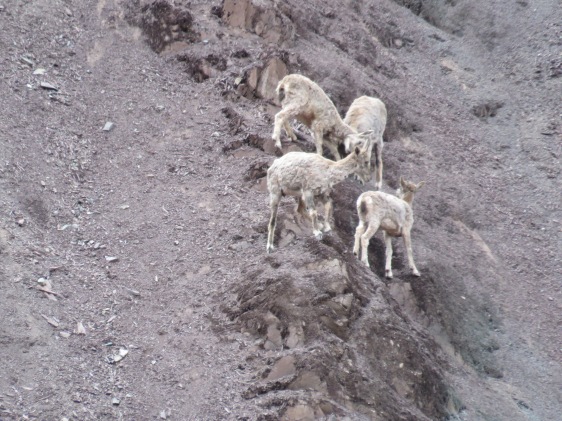 The campsite at  Shamsumdo, was hot and dusty and most unattractive. Not far from us across the river was a spring with carbonated water. There was a queue of trekkers lined up for a bath. We didn’t bother with any of that. We were all waiting to reach Leh the next day for tending to our toilette.

We busied ourselves with our last game of Cambio on the trek and catching up with our reading. We all had books of our choice on the trek except for Iqbal who was catching up with Freakonomics which was one of three prescribed books for reading from school! And with a 6 weeks summer break which included these 2 weeks on expedition there was no choice but for him to carry the book along and read and make notes along the way.

7th July : We were clearly at the end of our adventure now and it was a short two hours walk to the road head where a car had come from Leh to fetch us. The road is slowly inching its way closer into the Markha Valley from both ends. This landscape which is so rich in geology is experiencing massive road works operations with drilling, dynamiting and chipping away at mineral rich rocks. Takpa pointed out many different and interesting stones through out the trek. Garnets, crystals and different types of quartz.

On reaching Leh we were to happy to arrive in the sanctuary of the beautiful Lha Rimo hotel. Relieved too to scrub away the sweat, dust and grime of the previous nine days. The sun tan and peeling noses would stay with us for a few days longer and we would proudly wear these as our badges of honour.

For now we would spend the rest of the day meeting my Ladakhi friends and eating at a couple of places that we had planned on before leaving for the expedition.

(A little note on Leh, will be my last one in this Kang Yatze Gadabout. I hope you’re still travelling with me!).

8 thoughts on “Kongmaru La – the penultimate!”

This is a text widget. The Text Widget allows you to add text or HTML to your sidebar. You can use a text widget to display text, links, images, HTML, or a combination of these. Edit them in the Widget section of the Customizer.