4th & 5th July : We received a hero’s welcome back at Base. Dawa had baked many cakes and pizzas and other delicacies. 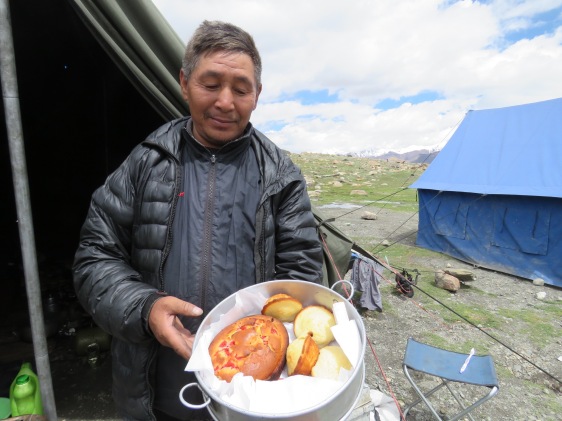 It was wonderful to be a couple of thousand feet lower! It seemed like a different climate zone. In the last 24 hrs BC had been populated by three other groups! Two out of them were going to climb Kang Yatze II and one Norwegian couple was going to be at BC for many days acclimatizing fully to climb the more challenging Kang Yatze I.

It was a happy homecoming to see Farid fit and cheerful. It seemed like the traumatic night had been in our imagination and not a reality. He assured me that the kidneys were functioning well. We each had become very particular about observing our liquid intake and comparative output etc as part of our acclimatization ritual. The descent on the morraine had been challenging for Farid as he was quite disoriented and fell a number of times but Padma was a great help and support. The vision in his left eye became blurred during the walk down. On reaching BC he spent the first few hours close to Dawa in the dining tent. They continued to coax him to drink liquids. Soup, water and tea. Until I suppose the cells in his body started getting rehydrated and he went for his first tentative pee. Soon after he says, he could start talking and generally feel normal. What a relief.

Finally when Iqbal came off the morraine after his numerous naps along the way, we had a happy reunion in the dining tent and a game of Cambio! It was good to know that the grey matter was still working.

I was relieved to note that no one was unduly disappointed about not bagging the peak. We had all had a wonderful experience. At that moment of our reunion I had to do a quick calibration of my presence among “Mah boyz”. Although for Takpa I continued to be the boys’ “Mama Genius”, I was actually very much one of the team. I was not their mother or aunt taking them on an outing and making sure they were having a good time. I would not take it as a personal failure that I was unable to provide them with the peak as the lollipop. These wonderful young men were not thinking of my age or my role in their lives. Age no bar. Gender no bar.

Iqbal developed a fever that night due to sheer exhaustion. Tejas caught up with his much needed sleep, though I continued with shallow sleep and very vivid dreams. Not very restful at all.

I was keen to get a glimpse of the other climbers on the mountain at 5am the next morning to check on their progress. One group returned to Camp having barely crossed the morraine and a few hundred feet on the snow. The other climbers summited that morning. I’m no saint, and I can’t say I was ecstatic about their success. It was interesting though to see their progress on the mountain sitting in the comfort of my tent at BC. Especially since they were using the same route as us. The route that we had opened up the day before. Our’s would have been the first ascent of Kang Yatze II this summer and now it was their’s.

(A telephoto of the climbers….following our footsteps!)

(Another telephoto, a bit hazy but our path is visible….and the other climbers)

We left BC soon after breakfast and almost skipped and danced our way to the next campsite in record time! Fitness is a wonderful thing having trudged up and down 20,000ft one starts feeling a bit invincible.

Nimaling was a most beautiful campsite though crowded. We had got spoiled for privacy and were used to being by ourselves and feeling like we owned all that we beheld while we were in the vicinity of Kang Yatze. At Nimaling we were back on the main Markha valley route and campsites had to be shared.

10 thoughts on “Back to Base and onwards to Nimaling”

This is a text widget. The Text Widget allows you to add text or HTML to your sidebar. You can use a text widget to display text, links, images, HTML, or a combination of these. Edit them in the Widget section of the Customizer.